British violinist Anna Blackmur was born in Sussex in 1988. Aged seven, she began violin lessons, and a year later, she won a full scholarship to Wells Cathedral School where she studied with Richard Ireland. Anna studied as a Royal College of Music scholar under Maciej Rakowski, completing her BMus with first class honours (2010) and her Masters in Performance with Distinction (2012).

In 2015, Anna was appointed Section Principal Second Violin with the Orchestra of the Royal Opera House, having previously appeared as Assistant Concertmaster with the orchestra. She has also appeared as principal or co-principal with the Academy of St Martin in the Fields (with whom she has toured extensively, directed by Joshua Bell, Sir Neville Marriner and Murray Perahia), Scottish Chamber Orchestra and the Orchestra of Welsh National Opera.

Increasingly in demand as a soloist and chamber musician, Anna’s recent concerto engagements have included Bruch’s Violin Concerto No. 1 with the City of Cambridge Symphony Orchestra, Vivaldi’s Four Seasons with Solistes de Musique Ancienne, Bach and Vivaldi concertos with London Concertante, and Mozart’s Violin Concerto No. 4 with the Orchestra of Situation Opera. She has given chamber concerts at the Little Venice, Presteigne, St Endellion and Two Moors Festivals, and has appeared at the Wigmore Hall and the Cheltenham and Shanghai International Music Festivals. In 2010, she appeared at the BBC Proms, performing Huw Watkins’ Sad Steps with the composer, broadcast on BBC Radio 3. Anna has recently appeared with the Aronowitz and Berkeley Ensembles and the Pavao Quartet, and has given recitals with pianist Tom Poster across the UK.

Anna is extremely grateful to Dr and Mrs Hudson for enabling the purchase of her violin, a copy of a Gagliano instrument by the Voller Brothers, c.1900. 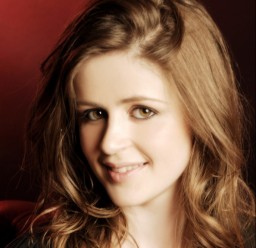