Loading...
Skip to content
« SCMF 2017 Artists
Cello
German cellist Martin Leo Schmidt was born in 1989 in Hamburg. He studied with Heinrich Schiff and Reinhard Latzko in Vienna and as a junior student in his hometown with Clemens Malich. Currently he is based in Berlin, continuing his studies with Julian Steckel. Master classes with Jens-Peter Maintz, Peter Bruns, Eberhard Feltz, with the string quartets “Alban Berg“, “Artemis“ and “Julliard“, as well as with the Beaux Arts Trio, shaped his musical personality.
He was awarded repeatedly with first and special prices at the German national youth competition. As a passionate chamber musician he shared the stage with artists like the Gewandhaus-Quartett, Daniel Müller-Schott, Alexander Lonquich, Martin Stadtfeld, Thomas Zehetmair, Pekka Kuusisto, Helmut Lachenmann or George Benjamin. He was invited to renowned festivals like the Rheingau music festival, Heidelberger Frühling, Festspiele Mecklenburg-Vorpommern, Lucerne festival, Beethoven Fest Bonn, Schleswig-Holstein music festival, Musikfest Stuttgart, Sonoro Festival Rumania or the Diaghilev Festival in Perm, Russia. Concerts brought him with his ensembles to various prestigious venues; including the Royal Albert Hall, the Weill Recital Hall NYC, Konzerthaus Berlin, Musikverein and Konzerthaus Vienna, Bellas Artes Mexico City and on invitation by the German music council to Tokyo and Kyoto.
At the age of 17 he played his debut as a soloist at the Laeiszhalle in Hamburg, Germany. He continues appearing as a soloist, this season e.g. with the cello concertos by R. Schumann and A. Dvorak in Germany and Mexico. Recordings of the major German radio stations, the Austrian ORF and the BBC document his performances.
He was principal cellist in the German national youth orchestra and by invitation of Claudio Abbado a member of his Orchestra Mozart in Bologna, Italy. Currently he is performing mainly with the Mahler Chamber Orchestra. He is playing an Italian cello of the 18th century and a German Bow by K. M. Knopf, 1850, both loans of the foundation Feldtmann kulturell, Hamburg.
Photo © Geoffroy Schied 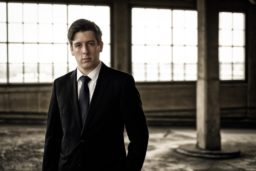