Canadian-American violinist Maia Cabeza was born in Japan in 1992 and is of Argentinean heritage. She came to international attention as the 1st prize “Mozart prize” winner of the 2013 Leopold Mozart International Violin Competition in Augsburg, Germany, and enjoys a multi-faceted performing career. As a soloist, she has performed with several notable orchestras including the St. Petersburg State Symphony Orchestra, Vienna Chamber Orchestra, Philadelphia Orchestra, Munich Radio Orchestra, Deutsche Staatsphilharmonie Rheinland-Pfalz, and Detroit Symphony.

In 2016, she released a positively acclaimed debut CD on the Oehms Classics label which features contrasting solo and chamber works by Mozart and Schnittke. Maia is extremely passionate and dedicated to chamber music and she has performed at many prestigious festivals: Marlboro Music Festival; Rheingau Musik Festival; Kronberg Festival Academy, Chamber Music Connects the World; Ravinia Festival; Krzyżowa Music; Verbier Festival Academy; and Prussia Cove Open Chamber Music, taking part in the tour group of 2015. In these festivals and others, she has had the opportunity to collaborate with distinguished musicians such as Nobuko Imai, Kim Kashkashian, Christian Tetzlaff, Dénes Várjon, and various members of the Cleveland, Guarneri, Juilliard, Orion and Vermeer String Quartets.

In addition to her solo and chamber music activities, Maia performs regularly with top European orchestras and has been invited to guest lead Aurora Orchestra, Czech Philharmonic, and Kammerakademie, Potsdam. Maia received her Bachelor’s Degree at the Curtis Institute of Music (Philadelphia, USA) where she studied with Ida Kavafian and Joseph Silverstein. She was also a member of the Berlin Philharmonic Karajan Orchestra Academy between 2012-2014. Currently she is pursuing a masters degree in Berlin at the “Hanns Eisler” Musikhochschule with Antje Weithaas. 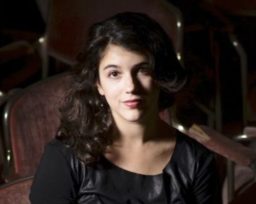