Loading...
Skip to content
« Artists
Violin
Katharine Gowers has performed in recital and as a chamber musician throughout Britain and abroad, collaborating with such artists as Alfred Brendel, with whom she played in a piano quartet on a worldwide chamber music tour, Imogen Cooper, Isabelle Faust, Steven Isserlis, Pekka Kuusisto, Christian Tetzlaff, Denes Varjon and Lars Vogt. She has appeared in chamber music partnerships at the Schubertiade Schwarzenberg and the Aldeburgh Proms, and at the Cheltenham, City of London, Delft, Edinburgh, Heimbach, Lucerne, Resonances, Salzburg and Spoleto festivals.
Katharine’s concerto appearances have included performances with the Royal Philharmonic, Bournemouth Symphony and Royal Liverpool Philharmonic orchestras, and with the BBC Big Band and the Chicago Jazz Ensemble. She has also toured with Nigel Kennedy and the English Chamber Orchestra playing Bach’s Double Violin Concerto.
For the 2012 Cheltenham Music Festival Katharine guest-curated Time Capsule: 1914-18, a three day series of concerts and associated events focusing on this period.
During 2018-19 she spent three months over two trips in La Paz, Bolivia, teaching at Bolivia Clásica, a non-profit organisation and music school created by Ana-Maria and Armando Vera. In the first lockdown of 2020 she taught Bolivia Clásica students for three months via Skype.
Katharine studied with David Takeno at the Yehudi Menuhin School and at the Guildhall School of Music, where she won the Gold Medal prize, with Roland and Almita Vamos at the Oberlin Conservatory in Ohio, with Joey Corpus in New York, and in masterclasses with Denes Zsigmondy in Germany.
She has been broadcast on BBC Radio 3 and across various European networks, and has recorded for EMI Classics and Somm. 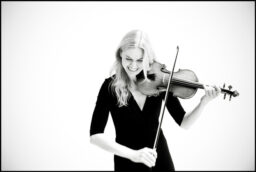