Alexis Karaiskakis-Nastos is one of the most dynamic cellists of a new generation of Greek musicians. He plays with the same enthusiasm the modern as well as the baroque cello, with a repertoire ranging from the early baroque, to the contemporary compositions of the 21st century. His active appearance both as a chamber musician and a soloist feature performances in major concert venues in Greece and the rest of Europe (Athens Megaron, Thessaloniki Megaron, Pavillon Musical de la Comtesse du Bary in Paris , Palazzo Ducale Vilnius, the Onassis SGT, and the Stavros Niarchos Cultural Center among others).

In 2017 he made his USA debut, performing Tchaikovsky’s “Rococo Variations”. He has performed as a soloist with the B.S.O in Florida as well as the City of Athens Symphony Orchestra. For his artistic presence Alexis was awarded the “Best young artist of the year” award in 2011 by the Theatre and Music Critics’ Association of Greece”. In 2018 he was appointed artistic director of “Samos Young Artists Festival” which was awarded as the “ best musical cultural organization active in the periphery for the seson 2018-2019” by the same association.

Alexis teaches cello and chamber music in Athens and has been invited to give masterclasses at the Frost School of Music in Miami. Alexis is a founding member of the piano trio “el Greco”. Combining the performing arts, Alexis collaborates often with choreographers such as Christos Papadopoulos and Pierre Magendie, as well as with the theatrical troop VASISTAS and Argyro Chioti. He studied at the Conservatoire National de Région de Boulogne-Billancourt in Paris where he graduated with distinction and two first prizes (cello and chamber music) and at Hochschule der Künste in Zurich, where he received a Bachelor and a master’s degree. His teachers were Xavier Gagnepain, Raphaël Chrétien and Roel Dieltiens in cello and Hortense Cartier-Bresson in chamber music. He was an active participant at masterclasses by Anner Bylsma, Philippe Müller and Jérôme Pernoo 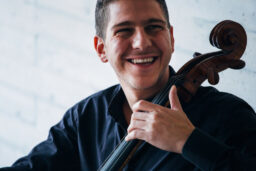